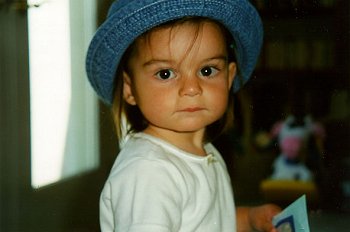 Zephyr was diagnosed on August 22, 1998 when she was 5 months old. We were fortunate in some ways as diabetes was not an unfamiliar disease to us. Zephyr's dad has had diabetes since he was ten. At first we too tried two shots per day of Regular and Nph, but trying to convince a toddler to eat on schedule is impossible. Next we tried using a combination of Humalog and Nph. With this our control got a bit better, but only because we were giving her 8-10 injections per day in an attempt to let her eat when she wanted. Meanwhile we are also diluting her insulin as her tiny body needs so very little. When my frustration hit rock bottom, I finally heard my husband's pleas to try an insulin pump on Zephyr. (He had been on an insulin pump for four years.) Okay, we were convinced, now how could we convince her doctors and our insurance company? It took a month, but we finally got all of the approvals and Zephyr got her pump the week between Christmas and New Years. Due to our doctors' schedules we could not get scheduled to start on the pump until the end of January. So for one month, we all practiced. Zephyr wore the pump itself for a week. For an adult, the weight is next to nothing. For a toddler, it is a something to get used to. Next we taped an infusion set on her without inserting it and attached it to the pump. She never pulled it off. And lastly we did a saline trial so that we could get used to the new calculations. We had some rough spots at the beginning and in some ways it was like starting all over again, but the learning curve is faster. Our biggest message is that toddlers CAN wear pumps and don't be afraid to dilute! Zephyr currently gets humalog diluted 1:10. The pump has actually brought a degree of normalcy to all of our lives and on Zephyr's second birthday she ate birthday cake, (or Happy Cake as she calls it!), without having us fear what it would do to her blood sugar!

Article about Zephyr from the Newspaper