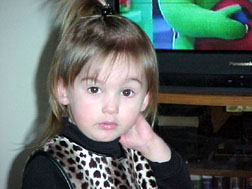 Marley was diagnosed with juvenile diabetes at the age of 11 months, just one month short of her first birthday. She was showing signs of extreme thirst and constantly having saturated diapers. She was normally a very good eater and during a period of two or three days, she was constantly insisting on a "ba-ba", which to her was her bottle. She wanted anything she could drink. She wouldn't just drink it though, she would chug it. I called the doctor, thinking that they would probably tell me that everything was "perfectly normal" and that I was just being a worried "first time mother". They didn't say that though. They told me to bring her in to have the doctor check her out. At the doctor's office, Marley was weighed and she had lost over three pounds. I had told her doctor of her abnormal drinking and urinating. My pediatrician knew immediately what it was. He told me that he thought Marley probably had diabetes. I was horrified. My perfectly healthy little baby had what? Diabetes? I didn't even know completely what diabetes was, but I knew it wasn't good. We were sent to the emergency room at the Children's Hospital immediately. It was confirmed that Marley had diabetes. As they were trying to put an IV into Marley's dehydrated veins, my husband and I sat with her as she cried in pain, and we both cried with her too.

We spent the next 24 hours learning as much as we could about diabetes, how to treat it, how to administer insulin, practiced giving saline injections on each other, testing blood sugar levels, Marley's diet, how to treat a low blood sugar, DKA, everything. It was quite overwhelming. Somehow, though, we convinced the doctors that by the next night, we were ready to be sent home. We felt that we would be much more emotionally ready at home, with Marley with us.

For the next eight months, I remained in constant contact with the hospital on a daily and then weekly basis. Things were not getting better. Marley was having lots of highs and lots of lows. We tried everything from one shot a day to three shots a day, NPH, Lente, Humalog, Diluted Humalog, combinations of two different kinds of insulin. We were testing her anywhere from 4 to 8 times a day. Nothing was working. When Marley was 15 months old, I was bound and determined to get her on the pump by the time she was 2 years old. I did not realize that I had my work cut out for me trying to convince everybody that this was the right thing for her. When I first asked my endo, she wasn't willing to put Marley on the pump because she was so young . I was told that I had to wait until Marley was 13 years old. I was not willing to wait 12 years. So I moved on until I found an endo who would listen to me and take me seriously.

That is when I met the wonderful diabetes team at Yale University. Minimed helped to put me on contact with them.

At the tender age of 19 months old, Marley was hooked up to her pump. She did wonderfully. Did not even flinch when it was inserted. She never ever touches the tubing or pushes the buttons on the pump. She knows that if she wears her pump, no more shots. The first two months were very trying. Because Marley is so small, any change in basal rate and boluses makes a big impact on her. Fine-tuning has been challenging but the wonderful diabetes educator that we work with has been very patient. She is determined to make this work for Marley. We were also having problems with the infusion sets that we used. They were crimping and clogging a lot. We finally found the right infusion set, and things have been wonderful. I can count on Marley being in range most times throughout the day, however, she still does have diabetes, and that in it allows no guarantees.

There have been many parents that are concerned with the fact of putting young children on the pump. I offer the following reasons why I feel that it makes sense to put a toddler on the pump as long as the parents are willing and able:

The pump has definitely made our lives easier as far as managing Marley's diabetes. However, the pump is NOT, by any means, a cure. Prior to the pump, I was so bent on getting it for her, that I did not think about the fact that she would still have diabetes. However, it has certainly enabled us to be a little bit more flexible with Marley and let her live a little bit more freely. She has always been a happy little girl, but now with the pump, she has so many more options available to her.

A friend of mine once told me that she was so glad she put her son on the pump, she would trade her right arm before she took it off of him. Until we started Marley on the pump, I had no idea what she meant. Now, I feel the same way. Marley is a different little girl now. She is happy that she wakes up in the morning and does not have to wait for breakfast to get her daily shot, which she hated. She is carefree again. She is not crabby or cranky all the time because her sugar is high. I have my happy baby back again.

If anybody has any questions for me, please feel free to email me. I had a lot of guidance during my questioning period of was the pump the right thing for my daughter. I know now that I have definitely made the right decision.