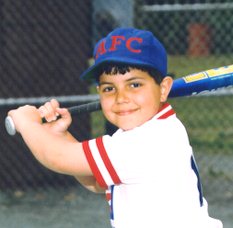 Christopher was diagnosed in 1994 at the age of four years old with diabetes. It was a very scary time for our family, but eventually we got used to the routine of insulin shots, blood sugar checks and eating on a schedule.

Despite our best efforts, Chris blood sugar would fluctuate constantly, ranging anywhere from 30 to 400 on any given day. We increased dosages and increased the numbers of shots, but it didn't work. About this time, we happened to get internet access and I started looking for other options. I found a diabetes chat room where I first heard about insulin pumps. I was intrigued, but I figured that no 7 year old would be able to handle an insulin pump. I sent away for the information and put it aside for when Chris was older (about, oh, 30). Chris had other ideas, though. He watched the videos and started asking all sorts of questions.

The turning point came one night we went out to dinner and Chris' blood sugars hit 500. He was in tears because he knew he hadn't done anything to cause his blood sugars to go that high. His frustration with his fluctuating numbers was too much for any of us to bear, so my husband and I decided that at our next endo appointment we would address the pump. Much to our dismay, the endo refused to even discuss insulin pump therapy in a child Chris' age. We knew that other children were doing it and at this point, Chris really wanted to try.

It took us a while, but with the help of some wonderful ladies I met on the internet, we found another endo and we were off!! Chris started pumping at 8 years old on Aug 14, 1998 and he loves it! It was alot of work at first, but he was up for the task. He learned how to carb count and how to operate his pump. At first he really hated putting in the infusion sets, but now he's able to put them in on his own.

But I don't think any of us really understood what a big difference the pump was making until the end of last summer.Our family went to a Boston Red Sox game. It was one of those very hot, very humid days when no one wants to eat. We spent the afternoon watching the Red Sox lose (SURPRISE!) without ever worrying about Chris eating. We all drank plenty of water that afternoon but no one ate anything until about 6:00 that evening when we stopped on the way home. We all had a major pig out on pizza, chicken wings, breadsticks and even dessert!! Chris blood sugars stayed within range the whole time and it was one of the most liberating feelings for all of us!!

We know its not a cure, but the freedom and flexibility have been wonderful. The best part is that we have a NEW CHILD!! Chris loves the fact that he doesn't have to eat unless he really wants to.(Having to get pulled away from his friends to test and eat because its "time" has always been one of the things he hated most about his diabetes)Because his bg's stay pretty stable now, he has a whole new wonderful personality. He feels good so much of the time now that he's much happier. He still has highs and lows with a pump but they are so much easier to manage with a pump than without one.